Musk Or Farley: Figuring Out Who Is The Tommy Boy Of Autonomous Cars

A Twitter exchange over the past 36 hours between two automotive Chief Executive Officers — Jim Farley of Ford and Elon Musk of Tesla — has provided the public some online entertainment. The inferences should truly scare minimally the one set of customers — let alone investors on Wall Street and drivers on public roads — and have many wondering which CEO is the Tommy Boy of the industry.

Yesterday morning, Jim Farley posted on Twitter the following comment along with a nearly 2-minute, promotional video about the testing of their hands-free driving capability: “BlueCruise! We tested it in the real world, so customers don’t have to.” 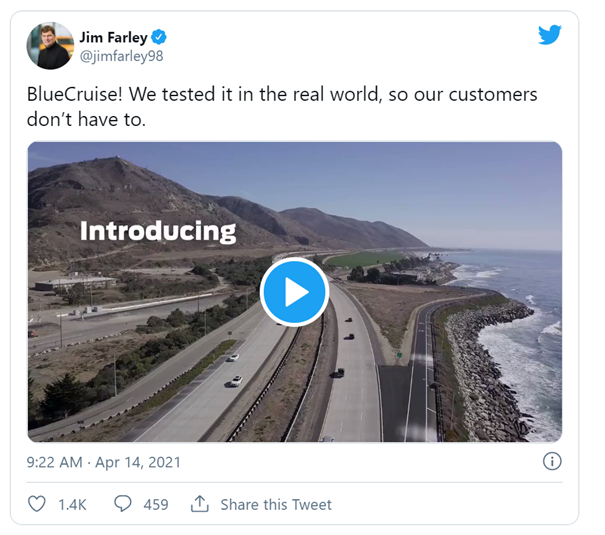 Some might imagine this was a thinly-veiled jab at a particular company given the ongoing media attention about Tesla’s Full Self-Driving feature and how the confusing, contradictory messages given to customers and governments about whether Tesla is beta-testing safety with customers on public roads.

And given multiple response-tweets, it’s clear that’s how many read the sarcasm. Michael Liebow, a Strategic Advisor for McKinsey & Company in New York City and a self-proclaimed Musk-fan, replied to Farley stating, “Wow. 500k test miles w/ a limited function cruise control and then you throw shade at Tesla for allowing 2000 loyal owners the opportunity to enjoy the most advanced features on city streets? The entire community generates billions of real world road miles. You must be nervous.”

Ian Otter, a Model 3 owner, had similar feedback. “[Ford’s testing] is about the same road testing as 1 Tesla!! Times that by around a million for this year alone. You have not even started.”

Finally the most interesting reply-and-re-reply was between “Techgnostik” of Colorado and Raphy Martinez of Georgia. Techgnostik thought Farley’s “flex” (*ironic choice of word given the Ford Flex) was odd given Telsa’s internal testing and that it has been “... running in shadow mode on every Tesla > 2015 on the road.” Martinez replied to Techgnostik thereafter saying “So why is AP still on Beta on my Model 3? Why did I pay $9,000 for something 2 years ago and still don’t have it? Competition is good, maybe this will make Tesla get their crap together and actually release FSD to those that paid for it.”

Regardless of the confusion between handsfree and not-handsfree technology, all of these Tesla enthusiasts came to an interesting, publicly-shared admission: they are, in fact, enthusiastically helping to test an evolving safety-relevant feature on public roads. And, as it were, some of this debate is part of the underlying investigation by federal officials that are looking into fatal accidents in Michigan and Florida.

Later in the same day, an aficionado of Tesla commented about Farley’s tweet and Elon Musk replied with a video link from Tommy Boy while stating, “I found some footage of the [Ford] drive.” 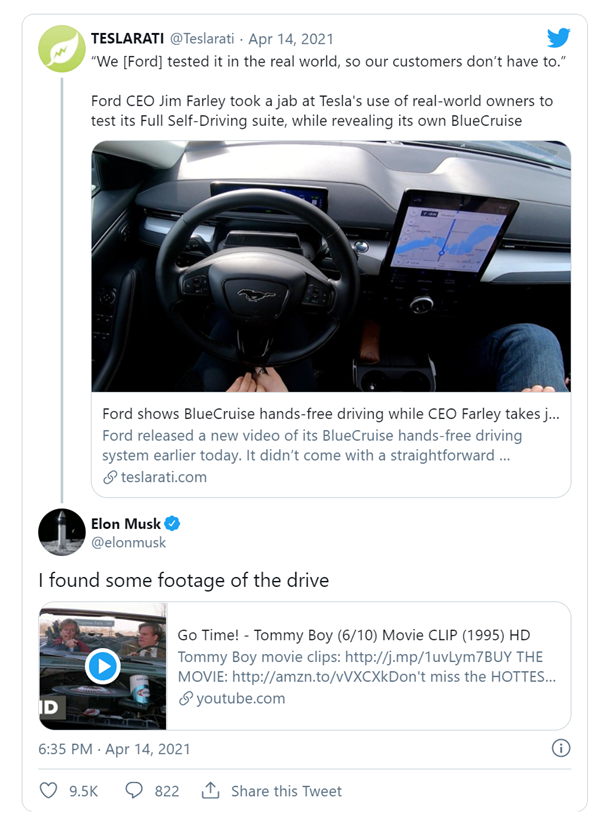 This inspired nearly as many trolls as Farley’s tweet, but maybe the most poignant was from Mark Spiegel, who posted a picture from one of Tesla’s deadly crashes and stated, “Unfortunately, I don’t have any Tesla testing footage but I do have a still photo!”

Putting aside that the late Chris Farley (33) is Jim Farley’s late cousin and, as duly noted by The Detroit Free Press Musk’s jab likely constituted a “crossing of the line”, there was questionable wisdom in any online response. Since Tesla was not specifically mentioned in the original tweet, does acknowledging it at all acknowledge something far scarier, i.e., there are real customers doing real functional-safety testing on real roads?

The answer very well might be yes, however the truly scary answer of whether Tesla’s standard Autopilot package or the more-advanced option entitled Full Self-Driving was engaged during the most recent, deadly crashes. NHTSA stated in March that it was, “... aware of the violent crash that occurred on March 11 in Detroit involving a Tesla and a tractor trailer [and has] launched a Special Crash Investigation team to investigate the crash.”

Tesla, however, believes the functionality is nearly complete and safe. In an interview for WIRED Magazine in early 2019, Musk promised the Autopilot system would be “feature-complete by the end [of 2019] and ready to ferry snoozing passengers by [the end of 2020].”

Be careful, Elon. We know what Tommy Boy thinks about guarantees.

This article was originally published by Steve Tengler (STEVE.TENGLER@KUGLERMAAG.COM) on Forbes.com on April 15,  2021