In an economy riddled with inflation, and investor looks for where to put his/her investments so as to outperform the standard return on investment (ROI). As NerdWallet reported back in March, , but it ironically has dropped by an average of 10% since that article was published. Typically, short-term bonds are seen as strategy to avoid the temporary inflation and permit the investor to divert the payout back to stocks after the turmoil, but as pointed out by GoBankingRates, "… bonds are facing their own challenges in the face of high inflation and a slew of anticipated rate hikes by the Federal Reserve." Creative investors as therefore turning to alternate choices like one of the 18,000 different crypto-coin stocks that temporarily outperformed other options, but even the more stable options like BitcoinBTC -3.8% or EtherETH -3.6%eum have plummeted 33% in the past month. Even putting the cash in a shoe box would lose money since it would be worth 8.3% less than April, 2021. 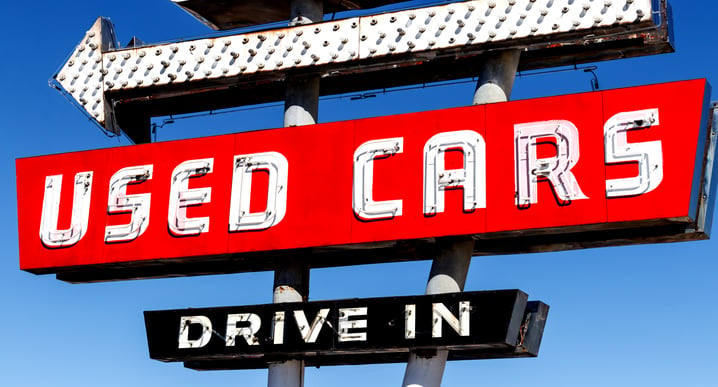 Interestingly, possibly the best strategy is buy a used car or three. "We just bought a used [SUV] with 8,000 miles on it," states Jennifer Merchant of Canton, Michigan. "Days later, we discovered the original sticker hidden inside the vehicle, which was a lower price than we paid."

Given two major elements – the historical retention of value and the ongoing chip shortage – the value of a used vehicle is likely to outperform other investments for the next year. 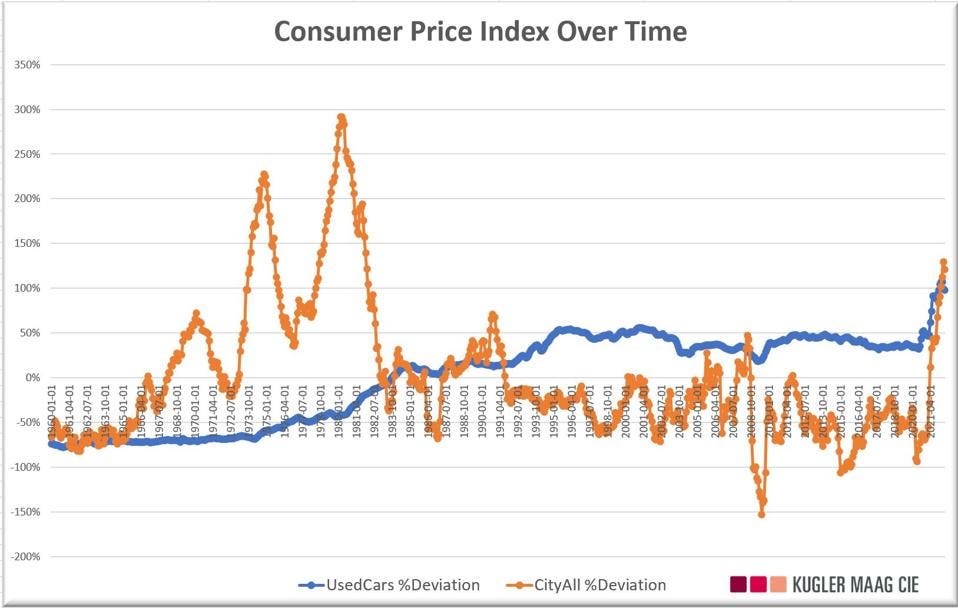 The Historical Retention of Value

The graph above shows the in orange the Consumer Price Index (CPI) from FRED for all items in U.S. cities over the past sixty years divided by the average over that time. In other words, in times of great inflation like the late 70's to early 80's, the CPI might be 250-300% of the average CPI, whereas during the Great Recession of 2008 it dipped to -150% of the average CPI. Up and down. And the current CPI is 121% of that average CPI.

The blue line, though, is the same calculation but for just the CPI of used cars and trucks. Mostly just up. No real downs. Used cars and trucks have historically retained their value while inflation jumps around. And for this brief moment in time, the current CPI is 98% above its average CPI making it almost equal to the inflation of all goods.

Will inflation drop? Likely. The Federal Reserve raised rates by half a percentage point last month – which was the largest such hike since the year 2000 – and this should begin to combat the rising prices. And based upon the Federal Reserve Chairman Jerome Powell's comments, they likely have a few such hikes ahead of them in 2022. But such a drop has not traditionally precipitated an associated decrease in used car values, thereby making it likely to outperform the market in the coming months. “Used car prices remain strong due to continued consumer demand for buying and trading vehicles. In fact, wholesale price gains continued for the past few weeks for several segments such as the small- and full-size trucks seen on our marketplace and also published by Black Book,” states ACV CEO George Chamoun. “Consumer demand has slightly softened from the unprecedented highs seen in 2021, but this has not resulted in prices dropping significantly.”

As many consumers are aware, one of the most significant commercial effects of Covid has been a shortage of automotive semiconductor chips (or "microchips"), which control nearly every aspect of the modern car. The average reader probably doesn't understand why the supply hasn't caught up with revised demand, but the answer is simple: building new plants requires years and billions of dollars.

So the current backlog of chips is creating a shortage of vehicles, which isn't supposed to subside anytime soon. The Associated Press has reported that U.S. new vehicle sales are off 12% because of the shortage with major manufacturers like General MotorsGM +0.2% (20%), Honda (23%) and Nissan (30%) feeling effects well above that. In its 2022 Crash Course Report, CCC Intelligent Solutions reports these production shortfalls are driving up the demand for used vehicles. “Used vehicle prices and their retention values soared in 2021, and with available inventories of both new and used vehicles anticipated to remain tight through 2022, used prices and retention values are expected to remain elevated through 2022.”

As reported by Newsweek in April, multiple automotive CEOs (e.g., Ford CEO Jim Farley, BMW CEO Oliver Zipse), "… expect the lack of chips to remain a problem into 2023." That will create an even greater pent-up demand, which will probably take much of 2023 to resolve.

In the meantime, the value of used cars will be driven upwards.

One other possible, creative investment I didn't mention previously was purchasing season tickets for a National Football League team. In a 2015 study by SeatGeek, wise money managers could have bought season tickets (such as the Dallas Cowboys) for $3,400 per seat and resold them for over double that on the secondary market, thereby getting a 112% ROI in under twelve months. "We ended-up finding that for the teams that did better last year," says SeatGeek Analyst Clint Cutchins, "… [they] had better [ROI] on their season tickets."

Alas, I live in Detroit. So I'll be buying used cars instead of football tickets.

This article was originally published by Steve Tengler (steve.tengler@kuglermaag.com) on Forbes.com on May 31, 2022