In early June, Joe Johnston (80) and Susan Johnston (78) drove their 2019 Lincoln Nautilus from their hometown in Naples, Florida, for an extended visit with their grandchildren in Grosse Pointe, MI, when a 500-year storm and 100-year storm hit the area within weeks of each other in June and July. “We woke-up in the morning with sixteen gallons of water inside the car,” states Joe Johnston. “Having heard horror stories about flooded cars, we called the insurance company almost immediately.” Over the next couple of weeks, the older couple drove their previously-beloved-now-safety-hazard (with an increasing stench) to three dealerships and four collision shops at the insurance company’s bequest only to hear repeatedly that no repair center would touch an overly-flooded vehicle. “It should be totaled,” was the pervasive sentiment, citing State of Michigan policy like “Electrical damage may not appear for months or even years after the [vehicle is] flood-damaged ….” Sans resolution, the Johnstons were essentially forced to ship the vehicle back to Florida and buy one-way flights home. 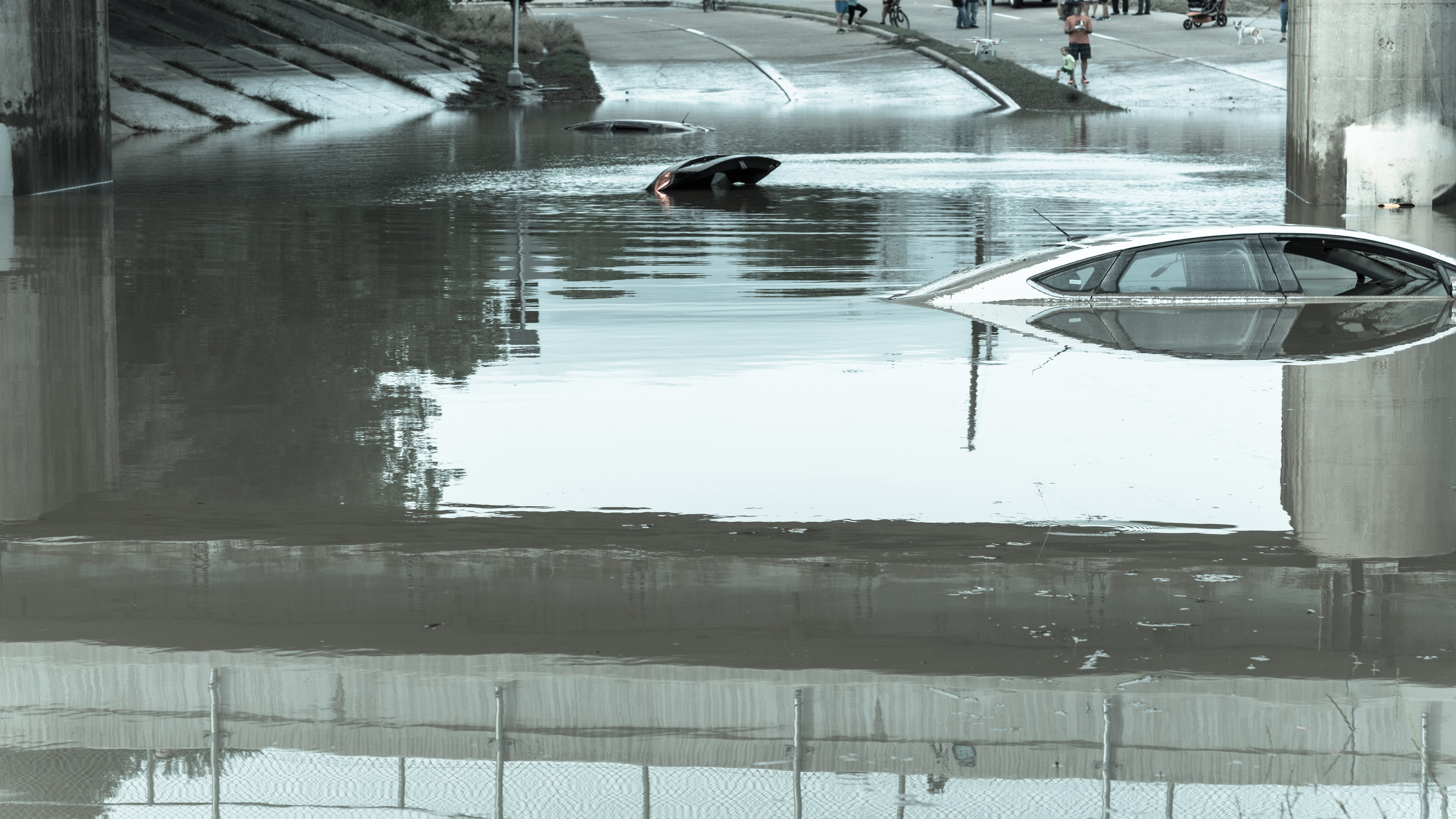 Flooded cars are becoming too commonplace in a climate change era with more moisture in the warm air.

Unfortunately, with climate change such stories are becoming all too commonplace. In the past six weeks alone, there have been multiple flooding events around the world. In Germany, floods in mid-July not only have killed or injured nearly 1000 people, but has created a wake of damage estimated at nearly 2B Euros (or $2.35B USD). Floods in Flagstaff, Arizona, last week caused flash floods with cars carried down a street-transformed-to-a-stream and the need for Arizona’s governor to declare a state of emergency. In central China, flooding killed at least 25 people inside a Zhengzhou subway and displaced another 1.2 million citizens. And in Columbia, floods recently left 3 dead and thousands affected. In fact, by the end of this century coastal flooding are predicted to create a wake equating to 20% of the global GDP or $14.2 trillion USD.

And, to be clear, climate change – regardless of personal beliefs about the underlying root cause – have made more “Acts of God” than just floods that create vehicular damage. From Portland to Seattle, drivers are experiencing tire blowouts during temperature spikes near 120F. Polar vortexes throughout the U.S.’s Midwest in the past two years have created extreme weather conditions and either inoperable cars or massive pile-ups on highways. 2020 hurricane damage was almost $47B USD which, according to the Center for Disaster Philanthropy, made it the seventh costliest season in history with 9 of the 10 worst having happened since 2004.

Climate change is, amongst other things, attacking our cars. And so the question becomes: Should we harden the vehicles, or buckle-up for some seriously expensive insurance?

Let’s begin with how engineers – especially Functional Safety engineers – approach a failure mode: they assess three things to determine the combined level of risk: severity, detectability and occurrence. For severity, an electrical snafu or tire blowout would assuredly get the highest rating (10 out of 10) since customer death or severe injury may result from a subsequent rollover accident. For detectability, the clandestine, corrosive waters would also warrant a high rating (10) since the customer cannot see the imminent threat and seek dealership intervention before the eventual crash. But for occurrence, water intrusion has typically been a low rate of occurrence (e.g. 2 or 3), making the overall score 10 x 10 x 2 = 200. However, other failure modes might gain higher scores and, therein, take precedence over waterproofing the electrical system or increasing the operating-temperature ranges of components. Yes, some manufacturers require any “10” in severity to be addressed for the sake of product liability, but lawyers sometimes assert that Acts of God break the chain of causation for civil culpability and, therein, not automatically cause it to bubble-up to the top of the design priorities.

Now something interesting occurs: The sea level rises multiple inches in the last few years – now 13 inches above the 1920 levels – and the National Oceanic and Atmospheric Administration reports that by 2030 the frequency of high-tide flooding could triple. And researchers looking at 774 stream gauges in 14 Midwestern U.S. states have already measured an increase in flooding in all but one of those states. As quoted in the Louisville Courier Journal, Gabriele Villarini, an Assistant Professor of Civil and Environmental Engineering, summarized the findings as, "It's not that big floods are getting bigger, but that we have been experiencing a larger number of big floods.” In fact, floods are now the most common and widespread of all weather-related disasters and kill more people each year in the U.S. than hurricanes, tornadoes or lightning, especially in densely-populated areas where land usage decreases natural absorption.

So if waterproofing or weather-proofing the entire electrical system became prioritized due increased occurrence, how much would that affect the cost of the vehicle? The short answer: no one truly knows. The closest comparable would be military Humvees, which cost approximately $350,000 USD, however the sticker price has several confounding factors: 1) lower demand for specialized vehicles causes lesser amortization of tooling costs over a small number of vehicles, 2) lower supply due to the military clearance required by the manufacturers and 3) additional features not needed for civilian vehicles.

Needless to say, though, the cost would rise nearly as much as the flood waters.

Instead of buying a flood-proofed vehicle, consumers could elect to purchase insurance. The average comprehensive rate for flood insurance is $189 per year in addition to the normal, collision coverage and may help protect you financially in the midst of an extreme event. The phrase “may help” is intentional, though, since a few confounding factors lurk behind the curtains:

· INTENTIONAL OBSTACLES: Many a truth is said in jest. Gilbert Huph, the cartoon insurance executive from The Incredibles screamed at Bob (a.k.a. Mr. Incredible), “What I can't handle is your customers' inexplicable knowledge of Insuricare's inner workings. They're experts! Experts, Bob! Exploiting every loophole! Dodging every obstacle! They're penetrating the bureaucracy!”  Just like the Johnstons experienced, insurance companies intentionally put repeated obstacles before a claim hoping customers cannot find the end of the rainbow.

· TOTALED VEHICLES: In theory, the insurance company totals the vehicle, it becomes a “salvage plate” and is auctioned-off to an informed-yet-sophomoric buyer. However, even Michigan – where the Johnstons’ car should have been totaled – warns that sometimes vehicles cross state or country lines, and any designation or warning of hidden water risks is lost.

· LONG-TERM PAYMENT: As true with any claim on an insurance policy, premiums increase after a claim. In fact, a single claim can raise car insurance an average of 28%.

· DOUBLE CLAIMS: More than 8.6 million people live in U.S. coastal areas alone and risk experiencing more than one flood. The Michigan towns that experienced a 500-year in July also suffered through a 100-year flood in 2014. An insurance company can drop a customer if it deems that customer too significant of a risk.

· POOR ALGORITHMS: Risk calculations for the insurance companies are statistical models based upon years of data. Such extrapolations, though, struggle when reality changes quickly. Climate change has certainly not been overnight, but disrupts the datalake upon which premiums were previously calculated.

So What’s The Win-Win?

Some trolls will assuredly read this and comment that “the messenger” is providing two losing scenarios: we pay or we pay. And maybe that’s true. Or maybe we listen to the Atomic Scientists who are talking about 100 seconds to midnight and invest in ways to reverse climate change.

Maybe then we’ll get something for our money.

This article was originally published by Steve Tengler (steve.tengler@kuglermaag.com) on Forbes.com on July 27, 2021